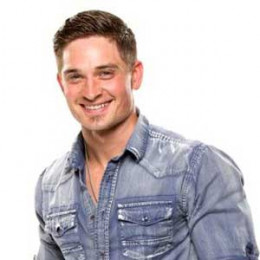 An American TV personality, hunting guide came to limelight after winning the reality show, Big Brother season 16. He is popular in the social medias with 105k followers on Twitter and 298k on Instagram. Caleb is married to Ashley Jay and has a stepdaughter named, Kylie. The husband-wife couple is expecting a baby soon. Ashley and Caleb together opened a fitness company called, Eil Fitness. Caleb was once in a controversy about his post related to the former president of United States, Barack Obama.

Caleb Reynolds was born on 27th November 1987 in Dallas, Texas to parents, Teresa Reynolds and Paul Reynolds. He is the resident of United States and belongs to white ethnicity. He has not opened up about his education and early life.

Before starting his career in the Hollywood, he used to work as a hunting guide in Hopkinsville, Kentucky. Caleb was one of the contestants of Big Brother season 16. It was the turning point of his life. Right after winning the show he rose to fame and is still known by the show.

Later on, he was selected as a contestant on Survivor: Kaon Rong in 32nd Season, a competitive reality show. Moreover, Caleb was again a contestant of another survival game named, Game Changers season 34.

The reality show personality, Caleb was married his beautiful wife, Ashley Jay in May 2016. They tied the knot after dating for a longtime. Reynolds has a stepdaughter named, Kylie Jay who was four when they got married. The family has a great life together. As per their posts, the couple is expecting another baby.

Caleb was in a controversy after his post about former President of US, Barack Obama using homophobic, racial and religious comments on Instagram.

The net worth of Caleb is under the curtains. But he might have a good figure worth. His source of income is the reality shows. He is also earning from his own fitness- centric company named, Eli Fitness.

Caleb Reynolds married his longtime girlfriend, Ashley Jay in May 2016 and gained a stepdaughter Kylie Jay.

Kylie Jay is the stepdaughter of Caleb Reynolds. The information about Kylie's biological father is not revealed.