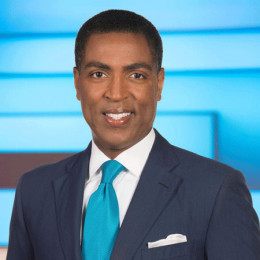 An Emmy Award-winning newscaster on WPLG Local 10, in Miami who is co-anchors of Local 10 News at 4, 5, 6 and 11 p.m. He started his career from KYW-TV, the CBS station in Philadelphia.He holds degree of journalism from University of Missouri where he was member of Kappa Alpha Psi fraternity. He was also former reporter at WGCL-TV from 1999 to October 2002. In 2006 he moved to Local 10 News channel. In 2002 he was selected to relay leg of the Olympic torch in the streets of St. Louis, Missouri.

Calvin Hughes was born in Cleveland, Ohio, U.S.A. and spent most of his childhood in East St. Louis, Illinois. He belongs to Afro-American ethnicity.

He attended the University of Missouri-Columbia and graduated with a Bachelor of Science degree in journalism. With interest in behavior from a very young age, he started reporting at the age of 19 for the local radio station KBIA in Columbia Missouri. While in the university he was a member of Kappa Alpha Psi.

Calvin Hughes in 1995 worked for KXAS-TV, Dallas. He served for the station till 1999 after that he worked for WGCL-TV, Atlanta along with Jane Robelot, providing his service till 2002.

In later 2006, Hughes joined Local 10, leaving his job in the KYW-TV, a CBS station in Philadelphia, where served since November 2003, anchoring weekend newscasts and as a weekday nightside reporter. While his time in the station, he covered several national stories like Live 8 Concert and Amish schoolhouse shootings.

Calvin Hughes is married man and father of two sons and a daughter. His wife is very pretty. In an interview, he stated that he is a family guy and he loves to spend time with his family. He also told that his wife has always been supportive throughout his career.

As of 2017, the couple a getting a divorced and Hughes is limited to a supervised visit to meet his three children. According to his soon to be ex-wife, she filed for the motion as their children are scared of their dad due to his abusive behaviour. She added that he has anger management issues and also spanked their children.

Calvin Hughes has served in the field of journalism for the last two decades. Since then, he has been a part of many stations and currently is a co-anchor of Local 10 News. From his successful career, he has probably collected an estimated net worth of $1 million.

He has not disclosed profession of his wife. Together the couple resides in Miramar, Florida with their children.

He is very handsome. He looks like his father. No other information has been available on him.

He is the second son of the family. He is a very healthy kid. No information is made available on him.

She is the only daughter beside two sons. Being only one daughter, she is very precious to the family.