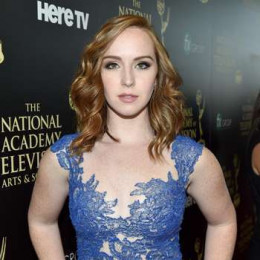 Camryn Grimes is an American actress and a producer. She is well known for portraying as Cassie Newman on 'The Young and the Restless' on 1997. When she was 10 years old, she became the youngest winner ever of the Daytime Emmy Award for Outstanding Younger Actress in a Drama Series. In 2014, she got a new role on the series, playing a woman with a resemblance to Cassie.

Camryn Grimes is a very private person and is concerned about her privacy. She believes in maintaining personal and professional life apart. However, still, there are many rumors on her about dating her co-stars from The Young and the restless. She is not married so far and is currently single.

Needless to say restaurants refused to serve me this day. Who can blame them I wasn’t wearing shoes: @ericblackmon

The actress is more focused on her career than being married or being in a relationship at the moment. There has been no convincing news about her relationship yet. Previously, she dared Oliver Singe.

Camryn Grimes' estimated net worth is around $500k. Her acting career is her major source of income.