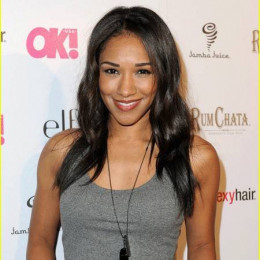 An American actress who is widely known as Iris West in The CW television series The Flash. She has also portrayed as Tori in the TV series The Game. She is daughter to African American mother and her European American father. She attended from Southern Methodist University in Dallas and graduated from Summa Cum Laude with a B.F.A in Theater. she had keen interest in acting from very small age and as a result in 2002, she starred in production of Shakespeare's Titus Andronicus at the Collin Theater Center. She is ranked fifth among "TV's 100 Sexiest Women of 2014" list by Buddy TV.

Talking about her personal life she has not married yet i.e. she she is still single. After being so popular she had managed to keep very low profile. Till now there has been no report or gossip regarding her affair with anyone. though she was spotted hanging out with guys holding hands, but she has never disclosed her relationship status in public. It seems like she is kind of person who enjoys her privacy.