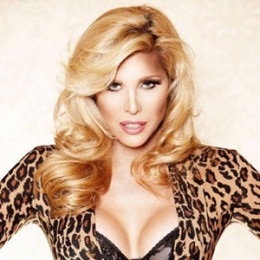 Candis Cayne is an American actress who rose to fame from the primetime drama series, Dirty Sexy Money, where she portrayed the character of transgender mistress Carmelita. Some of her popular movies include Mob Queen and Stonewall. She is a transgender actress and supports Gays & Lesbian.

Born on 29th August 1971, Candis Cayne is a daughter of Gary McDaniel and Patricia Relles, a teacher at Waldorf School. Her birth name is Brendan McDaniel. She spent her childhood in the city of Maui, Hawaii, United States. She has a fraternal twin brother Dylan.

She attended and graduated from Maui’s Baldwin High School in the year 1989. Later, she moved to Los Angeles and learned acting and dancing.

In 1990’s, she moved to New York, in order to further her career in showbiz, where she worked as a choreographer and drag performer.

During 1995, she got an opportunity to work in a documentary movie, Wigstock: The Movie, directed by Barry Shils. The same year, she was cast in the movie Stonewall and To Wong Foo, Thanks for Everything! Julie Newmar.

She made a music video debut in A Little Bit of Love which was produced by drag icon RuPaul. She was cast in No Scrubs and Milkshake music video as a dance teacher.

Candis also appeared on TV in different series. Some of her popular TV shows are Dirty Sexy Money, I Am Cait and The Magicians.

Candis was in a love relationship with DJ Marco McDermott since 2002. She even used to refer to him as her husband, though they never married.

The couple separated due to irreconcilable differences. They didn't have children from their relationship but she did take good care of Marco’s daughter, Satori, from his previous relationship.

After separation from Marco McDermott, she has never dated any one. Though there was a rumor that she was dating transgender Caitlyn Jenner as they were spotted kissing in a Salon but it was just a rumors.

After working many movies and TV drama, Cayne has successfully collected an estimated net worth of $500 million.