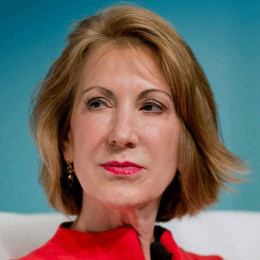 Carly Fiorina is an American Republican politician and former business executive who is better known as CEO of Hewlett-Packard in the early 2000s.

Carly Fiorina married Frank Fiorina in 1985. The couple tied the knot in an intimate ceremony. Frank has two daughters, Traci and Lori Ann, from his first marriage.

Previously, Fiorina married Todd Bartlem in 1977 and divorced in 1984.

Carly Fiorina holds an estimated net worth of $59 million.

Carly Fiorina was born on September 6, 1954, in Austin, Texas, U.S. She is a daughter to Madelon Montross and Joseph Tyree Sneed, III. She graduated from Charles E. Jordan High School in Durham.

In 1976 she earned the degree of Bachelor of Arts in philosophy and medieval history from Stanford University. She was 25 years old when she joined AT&T as a management trainee. Later she became the company's first female officer as senior vice president. She was named as the most powerful woman in business by Fortune Magazine. Despite being unsuccessful, she had also run for a California seat in the United States Senate. Currently, she is a chief executive of non-profit philanthropic organization Good360.

They used to study together in the Stanford University. They were actually class mate. After six years of their marriage the couple get divorced. They have no children from their marriage.

Professionally he is an AT&T executive. The marriage was second for both of them. He is the father of two children from his first marriage. Together, they have no any child.