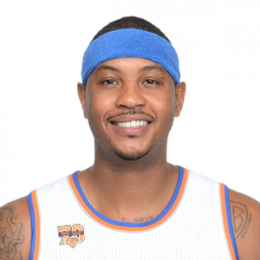 American professional basketball player, Carmelo Anthony is the son of Mary Anthony and Carmelo Iriarte. He attended Towson Catholic High School and Oak Hill Academy before playing college basketball at Syracuse. On 13th February 2004, Anthony participated in the 'Got Milk? Rookie Challenge at All-Star Weekend'. In the eighth game of the season, Anthony tied the franchise record of six straight 30-point games recorded by Alex English in 1982 up to 1983 season.

Carmelo Anthony married Alani "La La" Vazquez on 10th July 2010 at Cipriani's in New York City before 320 guests. Their marriage ceremony was filmed and aired on VH1, titled La La's Full Court Wedding. On 14th April 2008, Anthony was arrested on suspicion of driving under the influence, after being pulled over on southbound Interstate 25 at 20th Street in Denver for weaving through lanes and not dimming his lights. His son Kiyan Carmelo Anthony was born on 7th March 2007.

His son Kiyan Carmelo Anthony was born on 7th March 2007.