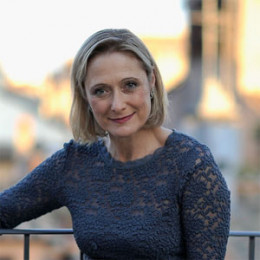 Caroline Goodall, an English actress, and a screenwriter is a RIFF Award winner for the best actress category. She debuted in the film industry from the movie, Hook and before that she participated in several plays and dramas in the theater. She is one of the successful actresses featuring in numerous hit movies.

Caroline Goodall was born as Caroline Cruice Goodall on 13th November 1959 in London, England with the birth sign Scorpio. She was raised by a publisher father and a journalist mother along with her sister, Victoria Goodall. She is a British and belongs to white ethnicity.

Talking about her academics, she finished her high schooling from St Leonards-Mayfield School. Later in 1981, she graduated with a Bachelor degree of Arts in Drama and English from Bristol University along with his mate, Jeremy Brock.

At the early stage of her career, she appeared on theatre works after joining Royal Shakespeare Company (RSC) and the National Theater. She appeared in many of the plays including Romeo and Juliet, Viola In Twelfth Might, Command or Promise and many others.

After that, she debuted in the movies from an American adventure film named, Hook in 1991 along with the cast members Robin Williams, Dustin Hoffman, Julia Roberts, Dante Basco, Amber Scott, James Madio, Maggie Smith and others. The movie has a box office collection of $300.9 million.

After that, she appeared in several movies like Cliffhanger by Renny Harlin, Schindler’s List by Steven Spielberg, Disclosure by Barry Levinson and many others that collected $255 million, $321.2 million, $214 million simultaneously in the box office.

As of 2016 and 2017, she appeared in the multiple of series like A Street Cat Named Bob by Roger Spottiswoode, The Crown by Peter Morgan, and The White Princess based on the novel by Philippa Georgory.

The gorgeous lady married her husband, Nicola Pecorini in 1994. He is an Italian-born cinematographer and a nominee of various awards. The couple is blessed with two children named, Gemma and Leone.

Before getting married to Pecorino, she earlier got married to Scott Hoxby (an actor) on 10th February 1990. But the relationship did not last long and got a divorce after certain years in 1993.

Goodall is currently 58 years old and stands at the height of 5 feet 8 inches (1.73m). With such numerous movies and series, she has collected a decent amount of net worth of $2 million.

On 10th February 1990, Caroline Goodall got married along with her first husband named, Scott Hoxby. He is an actor with whom she got separated after certain years in 1993.

Caroline Goodall got married for the second time along with Nicola Pecorini on 17th September 1994, after her first divorce. The couple even has two children together.

Gemma Pecorini is the eldest child of Caroline Goodall and Nicola Pecorini. She is the only daughter of the couple.

Caroline Goodall and Nicola Pecorini welcomed their second child and named him as Leone Pecorini.