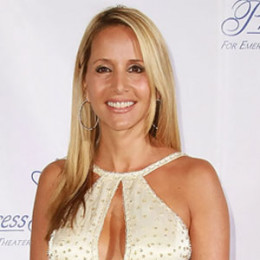 Carolyn Gusoff is married to Dr. Jon Turk, a facial cosmetic surgeon. The couple has two children named Amanda Turk and Graham Turk. During her work on NBC 4, she covered the crash of TWA Flight 800 as well as the crash of American Airlines Flight 587 and the Blizzard of 1996. In January 2012, she was hired by WCBS-TV to cover the Long Island Beat, where she was the Correspondent and Bureau Chief.

Three times Emmy award winner ‘Carolyn Gusoff’ was born in ‘New York City’. She is an Island reporter at WCBS-TV and an author too. Her book ‘Buried Memories: Katie Beers’ Story’ is a New York Times bestseller.

Carolyn Gusoff started her career in journalism at WEVU-TV, an ABC affiliate at the time and WLEQ-FM. In the late 1980s, she joined ‘News 12 Long Island’ and in 1993 she got a chance to work at ‘WNBC’, the NBC owned and operated the station in New York City.

She worked on NBC until 2008 and during her time, she has covered the most exhausting event including; the crash of ‘TWA Flight 800’, ‘American Airlines Flight 587’ and ‘Blizzard of 1996’. Later in 2009, she joined ‘WNYW’ where she covered the breaking news in the metropolitan area for Good day New York. In January 2012, Carolyn served at WCBS-TV to cover the Long Island Beat.

She has reported many big stories from natural calamities to war which symbolizes her as one of the bravest reporters of all time.

Carolyn Gusoff book ‘Buried Memories: Katie Beers’ Story’ was released in January 2013 which she wrote in collaboration with kidnapping victim Katie Beers and her book is a New York Times bestseller of that time.

Carolyn Gusoff was the three times New York Emmy Awards winner and 14 times nominee. In 2004, she won an Emmy for On-Camera Performance /General Assignment Reporting for the Mepham Hazing Scandal. She succeeds to earned Fair Media Council FOLIO awards three times in a row from 2013 to 2015 but for the different category.

The 54-year-old ‘Carolyn Gusoff’ is a married woman. She exchanged vow with facial cosmetic surgeon Dr. Jon Turk on September 1991 after seven years long relationship. The duo has been blessed with two beautiful children.

The duo has been enjoying their blissful married life since 15 years and there isn’t any news regarding their split or extra-marital affairs.

Considering her amazing career she has succeeded to establish herself as one of the strong and independent women with total net worth of $4.8 million dollars.