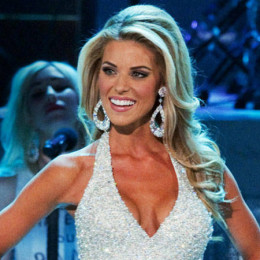 American model, former Miss California USA 2009, Carrie Prejean is also popular for Miss USA 2009 first runner-up.She is a daughter of Francine (Coppola) and Wilbert Prejean. Prejean graduated from Vista High School in 2005.She has been an ambassador for the San Diego Padres as a member of the Pad Squad since 2006.Prejean also volunteers with Luv-em-Up Ministries in El Cajon.Still Standing: The Untold Story of My Fight Against Gossip,

After the Miss California and Miss USA pageant, she pursued a career in modeling; however, she couldn't attain the fame and grab the success as she wanted.

Carrie Prejean was born Caroline Michelle Prejean on May 13, 1987, in San Diego, California to father Wilbert Prejean and mother, Francine Prejean. Her father belongs to the French descent, and her mother is of Italian descent. She grew up in an evangelical Christian household in Vista, California.

Prejean's parents divorced while she was only one year old, after which her lone mother raised her.

Prejean completed her school education from Vista High School in 2005 and joined San Diego Christian College, El Cajon, California where she studied special education. She later attended Rock Church where she volunteered with their outreach ministries. She also volunteers with Luv-em-Up Ministries in El Cajon; works with children with differently able people.

Carrie Prejean started pursuing a career in modeling while she was attending her graduation. She initially started working for Target, Saks Fifth Avenue, Bloomingdale's and Nordstorm. She also made her appearance in magazine covers including Bliss. She is working as an ambassador for the San Diego Padres,  Pad Squad, an MLB team, as a member of the Pad Squad from 2006.

Though she came first-runner-up in the competition, her answer to the final question became the national controversy. At the time, she was asked about her opinion about the same-sex marriage by the judge Perez Hilton who asked if Prejean thought U.S. state should legalize same-sex marriage. She answered,

The answer received her a nationwide attention where she received several negative comments. Later, Prejean told the Miss California USA pageant officials told her "she need[ed] to not talk about her faith" and forced her to apologize for her statement.

Meanwhile, American president Donald Trump, who owned most of the Miss Universe Organization at that time defended her answer saying

Miss California has done a wonderful job and that it wasn't a bad answer That was simply her belief.

Months later she won the Miss California pageant, the organization stripped off her crown saying she had violated the contract.

Model and former Miss California pageant winner Carrie Prejean has a good net worth of $3 million. She earns a good amount of money for her modeling work and has earned a whopping amount of money. Her husband Kyle Boller also earns a heavy amount of money which counts in millions of dollar.

Carrie Prejean is a married woman, who has been living a happy married life with husband Kyle Boller. Carrie Prejean married Kyle Boller, a former NFL quarterback in San Diego, CA On 2nd July 2010. She was engaged to Boller since February 7, 2010. The couple's first child arrived on 11th May 2011, a girl named Grace Christina. She and Kyle have a son named Brody Boller, born in 2013.

Just months after their marriage, the couple announced they were expecting their first child together. They gave birth to a daughter, Grace Christina on May 11, 2011. They also welcomed a baby boy, Brody Broller in 2013.

In late 2009, Carrie Prejean once again came to headlines for her sex tape release. The solo sex tape was acquired by the Vivid Entertainment who offered her $1 million for the right to release the tape. She reportedly refused the offer, however, the tape somehow went to the market.

Later, Prejean sent a letter to the Vivid Entertainment through her lawyer saying that they will be sued if they released the tape.

Her son named Brody Boller was born in 2013.