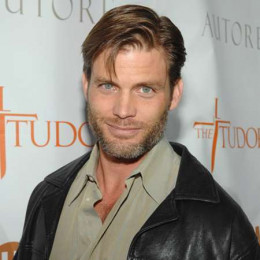 An American actor who is better recognized for his role as Johnny Rico in the 1997 Sci-fi satire film Starship Troopers. He is son to Diane and Casper Robert Van Dien, Sr. He graduated in 3rd command from St. Petersburg campus of the Admiral Farragut Academy. Later he attended Florida State University in Tallahassee where he was trained to be boxer by coach Eric Johnson. His first ever role was as Ty Moody on the daytime soap opera One Life to Live. He has also starred on the prime time drama Beverly Hills, 90210. He was also casted as Patrick Bateman in 2002's The Rules of Attraction. He is also celebrity ambassadors for the non-profit organization Childhelp.

He was married to granddaughter of Robert Mitchum and the couple has two children. After four years of their marriage due to some personal dispute the couple divorced each other. Currently he holds full custody of his children. After divorce he again got married with his co-star from 1999 TV movie The Collectors. Their marriage was performed in Las Vegas, Nevada in presence of their family and friends. He has two daughters from his second marriage as well.

They were in marital relationship with each other for four years. Together they were parents of a son and a daughter. After divorce Casper holds full custody of their children.

They first met each other on the set of 1999 TV movie The Collectors. She is 6 years older than him. In 2005 both of them starred on reality series, I Married a Princess. They are parents of two kids.

He is the eldest child of him from his first marriage.

She is very gorgeous. She is the youngest daughter from his first marriage.

She is the first child from his second marriage. She is very cute.

She is very cute. Her picture can be found in facebook page of Casper Van Dien.