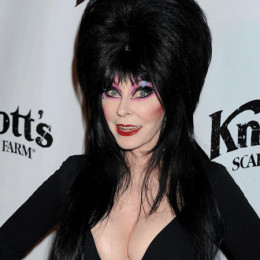 She is a human and animal right activist and actress, best known for her starring as Elvira in Mistress of the Dark. At the age of 17, she began her career from the show "Vive Les Girls" at the Dunes Hotel as the youngest showgirl in LA history. She had modeled for several men's magazines, such as Modern Man, Man's Delight and High Society, during 1970s. Femme Fatales magazine ranked her No.1 of Sci-Fi's Sexiest B-Queens, in the year 1997.

Talking about her personal life, she was once married to a man with whom she stayed in a relationship for 22 years. The couple together has raised a daughter. She has been through serious relation with several men in her past days but these days she is totally single. She hasn't been a part of any controversial issues till date as she has managed to keep her image good in the public and media.

He is the first husband of Peterson who by profession is a director and producer. The couple has a daughter from their marriage.

She is the first and the only child of Peterson who was born safe and sound.