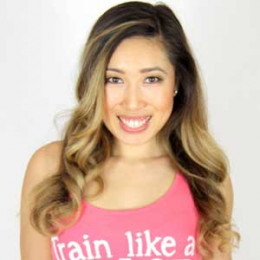 Cassey Ho is a certified fitness instructor who is famous for her fitness community online named, Blogilates. She is an American fitness entrepreneur and is known as the raising You Tuber growing both nationally and internationally. Cassey published various videos and DVDs and won numerous awards and appreciations.

Is Cassey Ho Married? Who's Her Husband?

Cassey Ho is living a blissful married life with the love of her life, Sam Livits. The 33-year-old internet personality and her boyfriend walked down the aisle on October 6, 2018. 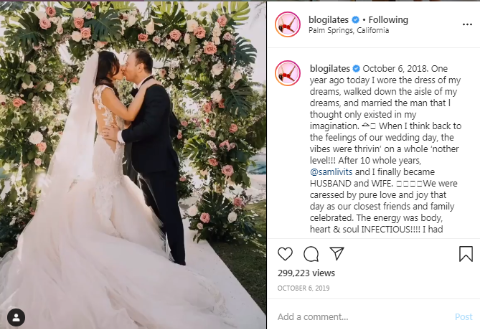 Prior to the lavish wedding, the lovebirds announced their engagement on August 22, 2017, in presence of close friends and family members. Even though Ho and her beau took their relationship to the next level after dating several months.

The YouTube star and her spouse, Sam Livit first met 12 years back at Whittier College in 2008. At that time, both of them were pre-med juniors. Surprisingly enough, Sam helped his beloved by teaching her finance course, this is how their feelings for one another blossomed in May 2008.

Livits and Ho once split up in 2009 due to some personal issues, it wasn't easy for the duo. They spoke to one another every day. And, finally, they reconciled within two years.

Nevertheless, Cassey optionally shares any picture of her partner on her socials but she never lags behind showing her affection to him. On 15 February 2020, the pair celebrated Valentine's Day at their Los Angeles home.

How Much Is Cassey Ho's Net worth?

Cassey Ho runs the largest female fitness channel with an estimated net worth of $2 million. Her source of income is the channel, Blogilates. In 2017 the channel has more than 3.4 million viewers, and after pilling up, it reached up to 430 million viewers.

On average her channel gets 30000 viewers that earn $450 a day and $170000 per year. Besides this, she also has a clothing line called BodyPop. She also makes a good amount from various DVDs related to fitness training.

After her graduation, she started to design yoga and gym bags. It might have inspired her in the field of fitness. When she was 16, Ho participated in a pageant then started Pilates, and that worked for her.

Right from there she began to teach and inspire the ladies all over the world hence made a channel on YouTube called Blogilates to teach everyone. From her videos, many of the people transformed their physique. Before that, she also worked in her college as the fitness instructor too.

Cassey got the title of 2014 Streamy Awards for Best Health and Wellness Channel and also Social fitness Shorty Award named Fitness Magazine's Best Healthy Living Blogger of 2012. She was also entitled to You Tuber's Next Trainer.

The internet personality, Cassey was born on 16th January 1987 with the birth name, Cassey Vinh Ho in Los Angeles, California, United States. Ho is now the residence of Union City, California. The internet sensation was raised by her Vietnamese parents Bach Ho and Cuu Ho.

Cassey grew up with her sister, Jackelyn who is also a fitness instructor like her. She attended Whittier College with a degree of BS in biology. Ho is talented since her childhood, she began a bakery with her mother "Cooplex Cookies & Candies". Other than that, she wanted to be a successful fashion designer too but she could not make it due to fear of failure and money.

He used to be unhealthy during her early age and suffered from depression too. Later on, after much dedication and workout, she transformed her body. Now her top priority is her physique and staying healthy. As a matter a fact she inspires others by posting various videos about workouts and all.

Cassey Ho, the fitness enthusiast is married to her boyfriend Sam Livits since October 6, 2018, after being engaged in 2017. Now, the cupid has been together for one year five months.