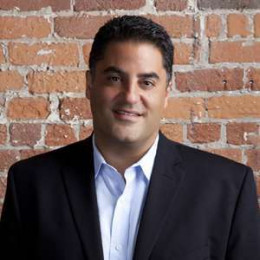 Cenk Uygur, a Turkish- American columnist, commentator and an activist, is currently married to Wendy Lang since 2008. He is the co-founder of the commentary program The Young Turks and is also the co-founder of the TYT Network. Cenk has also appeared on the MSNBC as a political commentator and was also portrayed in the same position on the Current TV. He majored in management from the Wharton School of the University of Pennsylvania. He also earned a degree in law from the Columbia Law School.

Cenk Uygur was raised in a Muslim family. As of now, however, he describes himself as a fervent agnostic and atheist. He received the Humanist Media Award from the American Humanist Association. He started having an affair with marriage and family therapist Wendy Lang and they eventually got married. He has a daughter and a son with his spouse who were born on 2012 and 2010 respectively.

He is married to Wendy Lang, a marriage and family therapist. They are blessed with a son and a daughter.

The couple is parents of two children and among them one is a son named Prometheus, born in July 2010.

She is the second child and the first and only one daughter born to this commentator on 15 October, 2012.