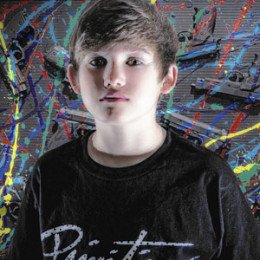 Charles Gitnick is a young American artist who is widely popular on Instagram. He began to sell his art on Venice Beach, California and it later became in-demand in the New York art scene. Charles’s work has appeared in exhibitions internationally in Switzerland, Colombia, and other countries.

Charles Gitnick was born on April 3, 2002, in Los Angeles, United States of America. His father's name is Neil and he has an elder brother named Thomas, was a basketball fanatic.

His parents soon noticed Charles's skills and had him enrolled for art lessons. The boy, nonetheless, didn’t like to attend classes as Charles felt that his inventiveness was being curbed by his tutors. Therefore, Charles left the classes and began studying art by himself through books and videos.

Charles Gitnick’s favorite artists are Jean-Michel Basquiat and Jackson Pollack who he considers his inspiration. He developed his interest in his art work after hearing about the shootings and terrorist attacks that happen regularly.

Gitnick began to sell his art on California and Venice Beach. His extraordinary work in art has been appeared in in exhibitions internationally in Switzerland and Colombia so far.

In the year 2017, Charles joined the likes of Joey Birlem, Aaron Melloul and Duhitzmrk on Weekend Rush Tour.

The 15 years old Charles, apart from creating art work, he loves to play football and skateboarding. Other than that, Charles is also a good friend with social media star Joey Birlem.

The American artist Charles Gitnick, who won millions of hearts at the young age of 15 and gained a commendable amount of success. Charles has garnered a huge amount of net worth from his creative career which is believed to be $1 million.