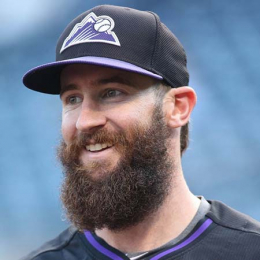 Charlie Blackmon aka "Chuck Nazty" is a skilled American professional baseball center fielder of the Colorado Rockies who is currently playing for Major League Baseball(MLB). Charles made his debut on MLB as a member of the Rockies. He won Silver Slugger Award with MLB All-Star for three times.

The MLB All-star relishing lovey-dovey relationship with his girlfriend turned wife. Charlie and his partner turned their love affair into holy matrimony after dating several years. Let's check out their current relationship status.

Charlie Blackmon is happily married to his long-term girlfriend Ashley Cook for eleven months now. The couple tied the knot on Highlands, North Carolina on 12 November 2018.

Blackmon's partner shared the news of their wedding three days later through Instagram. Ashley Cook took the wedding pictures and announced their wedding date on 15 November 2018.

Moreover, the wedding was held in the presence of close friends and family. Ashley looked stunning in a white bridal gown with her and Charlie opted a white shirt and black pants.

I am officially grown up. We are lucky to have friends and family willing to come and celebrate with us.

The lovebirds dated for a few years before getting engaged in February 2018. The National League player is enjoying the blissful married life with his beloved wife.

The baseball player who is a devoted Christian enjoys traveling, fishing and mountaineering. Meanwhile, Charlie is also a member of a Bible study group with his team the Rockies.

What is Charlie Blackmon's Net Worth?

The 33-year-old MLB star possessed a net worth of $13 million in 2018. His wages in three years has seen a heavy growth as he was already signed $3.5 million by the Rockies. His earnings later surpassed to become $7.3 million by the fall of 2017.  He is expected to make $14 million per season in 2018

Charlie Blackmon signed a 6-year contract with the Colorado Rockies for $108 Million. He gets an average salary of $21,333,333 per year. Blackmon's net worth lies somewhere between $100 million-$300 million.

Who wore it better? #ProudFamily

Blackmon started his professional life in the year 2004 as a pitcher in the 28th round in the Florida Marlins. He then switched to different baseball clubs like Boston Red Sox, Major League Baseball draft(MLB), Tri-City Dust Devils, Modesto Nuts, Tulsa Drillers, Colorado Springs Sky Sox and the finally returned to MLB.

Blackmon homers in loss to Mets on 18 September 2019. He went 2-for-3 with a home and a walk in the Rockies' 6-1 loss to the Mets at the same evening. He has one again become a fantasy star this season. 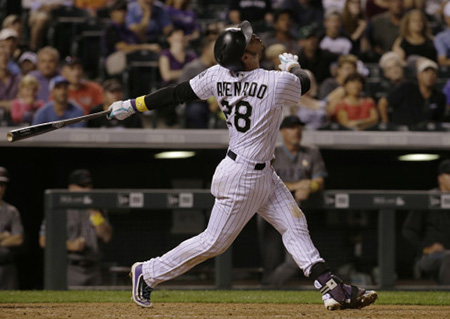 Charlie attended Young Harris College and then got enrolled in the Georgia Institute of Technology where he received a scholarship. Blackmon won his first NL Player of the Month Award in May 2017.

The 6 ft 3 inches tall player has been rewarded with Louisville Silver Slugger Award, recognizing the best player in each league at each position.

As decided previously, Charlie Blackmon and Ashley Cook wedded in November 2018. The couple shared the news among friends and lovely fans via an Instagram post.