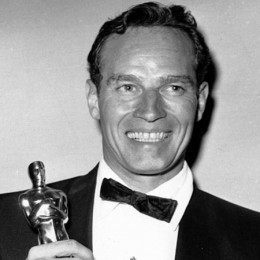 American actor and political activist, Charlton Heston was a veteran Hollywood star. He worked on more than 100 movies during his 60 years of film career. He has won numerous prestigious awards for his contribution to English film industry. He even succeeds to grab a Presidential Medal of Freedom from the president, George W. Bush. He died at the age of 84 on April 5, 2008, due to pneumonia.

Born on October 4, 1923, Charlton Heston was a son of  Lilla and Russell Whitford Carter, a sawmill operator. He was born in Evanston, Illinois, while some online sources have mentioned the place, no official confirmation has come from it.

He belongs to the major of English, and partially of Scottish descent. Heston spent most of his childhood in a rural, heavily forested area, and lives an idyllic life. His parents had divorced when he was just 10, and eventually, his mother married a man named Chester Heston from which, Charlton surname was taken.

Charlton went to New Trier High School and involved in dramatics. In 1941 he appeared in the school’s drama program,  the amateur silent 16 mm film adaptation of ‘Peer Gynt’. He grabbed a drama scholarship to Northwestern University because of his outstanding drama skills.

Charlton Heston started his career in 1944, as he enlisted in the United States Army Air Force. He served two years as a radio operator and aerial gunner. Over the course of his military career, he succeeds to reach the rank of staff sergeant.

In 1964, he shifted to New York City to pursue his acting career. Following year, he made his Broadway debut with Antony and Cleopatra and also became active on television during this period. His popularity as a stage actor soon led him Hollywood offers, and in 1950, he made his professional movie debut in Dark City.

Heston did a breakthrough performance on his first movie which caught the attention of prominent filmmaker Cecil B. DeMille and offers him as a circus manager in ‘The Greatest Show on Earth’ in 1952. Later, he starred as Andrew Jackson in ‘The President’s Lady.'

He portrays the character of Moses in the film ‘The Ten Commandments’ (1956) which was highly appreciated by critics and audiences and helped him to gain the status of an icon in Hollywood. In 1959, he appeared in a historical role in ‘Ben-Hur’ which marked him one of the best actors in American cinema. The movie helped him to win his first  Academy Award for Best Actor.

Despite acting, he was actively involved in politics too. He spent almost 50 years of his life in political activism. In 1963, he participated in Dr. Martin Luther King's civil rights march in Washington, D.C. From 1998 to 2003, he served as the president of the U.S. National Rifle Association.

Once he was invited by Harvard Law School in the program titled, Winning the Cultural War and he said,

And he said to the students,

"You are the best and the brightest. You, here in this fertile cradle of American academia, here in the castle of learning on the Charles River. You are the cream. But I submit that you and your counterparts across the land are the most socially conformed and politically silenced generation since Concord Bridge. And as long as you validate that and abide it, you are, by your grandfathers' standards, cowards."

Heston sent a support message to the American forces in the Iraq war in 2003, He also opposed abortion and introduced Bernard Nathanson's 1987 pro-life documentary, Eclipse of Reason.

Charlton Heston was married to actress Lydia Marie Clarke on March 17, 1944. The duo first met through a mutual friend and continued their relationship till his last breath which made him one woman man.

The duo shared two children; a son, director Fraser Clarke Heston, and an adopted daughter, Holly Ann Heston. The couple was together for 64 years, and in between, there were never any kinds of rumors regarding their divorce or split.

Charlton suffered from several health problems during the 1990s. He underwent a hip replacement in 1996 and 1998 he was diagnosed with prostate cancer which eventually went into remission.

In 2002, Heston revealed that he was diagnosed with Alzheimer's disease, saying, "I must reconcile courage and surrender in equal measure." He died at the age of 84 on  April 5, 2008,  at his home in Beverly Hills, California. The cause of his death was a mystery for several months, but later it was disclosed, his death was due to pneumonia.

His funeral was held on April 12, 2008, at  Episcopal Parish of St. Matthew's Church in Pacific Palisades which was attended by 250 guests including Nancy Reagan and Hollywood stars.

Lydia Marie Clarke is an actress but she is mostly recognized as the wife of Charlton Heston.

Fraser Clarke Heston is the only son of Mr. and Mrs. Heston. He is the popular director of English movies.

Holly Ann Heston is the adopted daughter of Charlton and Lydia Marie Clarke. She is very close to the mother.