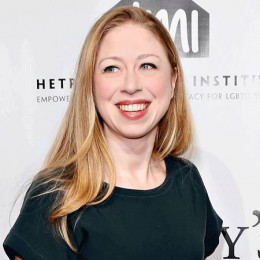 She is the only daughter of the 42nd President of the United States, Bill Clinton and former U.S. Secretary of State Hillary Rodham Clinton. She was Special Correspondent for NBC News for 3 years. She was named after Joni Mitchell's song, "Chelsea Morning". She attended Stanford University and obtained master's degrees from Oxford and Colombia as well as a Doctorate in Philosophy from Oxford. In starting of her career she worked for McKinsey & Company consulting firm. Currently she is working at Clinton Foundation and Clinton Global Initiative.

Exploring her personal life, she has already been married. Actually she and her husband were priorly a good friends but after her breakup with her first lover she dated him. After dating for nine years they finally turned their relationship into marriage. There marriage took place in summer in presence of family and friends and it was lavish $1 million dream wedding. Couple has already been blessed with one adorable daughter.

Professionally he is a investment banker. Their marriage took place in an interfaith ceremony in New York. Together they are parents of one daughter.

She is the only daughter of the couple. She is very cute and gorgeous.