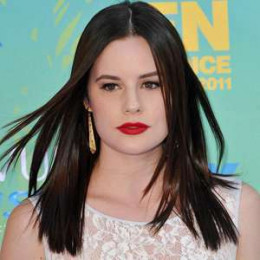 Chelsea Hobbs is a Canadian actress, known for playing Gerda in "Snow Queen" and Emily Kmetko in the ABC Family teen drama "Make It or Break It". She is the daughter of Richard Hobbs and Dana Hobbs. Hobbs attended an advanced secondary school arts curriculum school and began dancing at the age of three. She has appeared in over 40 commercials and has appeared in the kids' improvisational TV series "No Adults Allowed". She was nominated for the Best Lead Female Performance by Leo Awards for her performance in "Snow Queen".

Chelsea Hobbs married her longtime boyfriend photographer Teren Oddo in January 2007. But after seven years, they ended their relationship with a divorce in 2014.  The couple shares two children, a daughter named Wylie, born in 2006 and a son named Kingston, born on April 27, 2011. According to her current public profile, Hobbs is possibly single. We have no record of her past relationships and dating history.

Hobbs got married to photographer Teren Oddo on January 2007 but their marriage life was short-lived and ended with a divorce in 2014.

They have two children, Wylie is the first child of this couple, born in 2006.

He is the second child of this couple named, Kingston who was born on April 27, 2011. He has one elder sister..