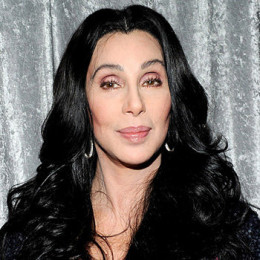 Cherilyn Sarkisian better known as 'Cher', is a singer and actress. She is best known for her role in the film Moonstruck, for which she received an Oscar for Best Actress. Throughout her career, she has won three Golden Globe Awards, an Emmy Award, a Grammy Award, an Academy Award, a special CFDA Fashion Award and a Cannes Film Festival Award. She was born to John Sarkisian, a truck driver and Jackie Jean Crouch, an occasional model and actress.

Her personal life is full of ups and downs. Till now she has been married twice and sadly both of her marital relation didn't work so well. She was married to her first husband for nearly 11 years and have raised a son together. Right after her divorce, she got married to her second husband for almost 4 years. The two have raised a son together. These days she is dating an American comedian and writer.

Salvatore Phillip "Sonny" Bono is the first husband of Cher, with whom she enjoyed her marital relation for nearly 11 years. He died on January 5, 1998.

Musician, singer and songwriter, Gregory LeNoir "Gregg" Allman is the second husband of Cher. They stayed as husband and wife for less than 4 years.

Chastity is the first son of Cher, who now is an advocate, musician and writer.

Elijah is the second son of Cher, who now works as a musician.