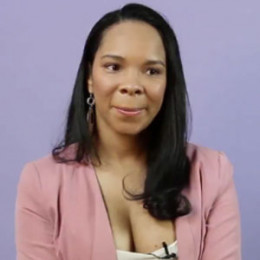 Multi-talented American actress Cherie Johnson is also writer, film producer and author as well. She garnered a huge overnight popularity after portraying the character Cherie Johnson alongside child actress Soleil Moon Frye in the television series Punky Brewster. Johnson made her screen debut in the 1986 film Playing With Fire. Besides, she published best-selling books including Around the World Twice, Lil Cherie Dresses Herself and 101 Survival Tips for Missionary Moms.

Cherie Johnson was born on November 21, 1975, in Pittsburgh, Pennsylvania, United States of America. Her uncle, David W. Duclon, is a screenwriter and a television producer. Cherie belongs to American nationality and ethnicity wise, she is of African American and Puerto Rican descent.

Cherie's uncle Duclon inspired and encouraged her to pursue acting. When six, Cherie appeared on Punky Brewster as Cherie alongside Soleil Moon Frye throughout the series run.

At the age of 15, she appeared as Maxine on the long-running ABC/CBS sitcom Family Matters, for eight seasons from 1990-1998.

Johnson has made guest feature on The Parkers and performed a vocal guest character on The Proud Family. Further, she featured in Days of Our Lives. After that, Johnson began producing films in the early 2000s. She then signed on to play in the romantic film Fanaddict.

Writing is Cherie’s second career choice. On August 10, 2010, she released her first novel Around The World Twice. After a year, she also published a poetry book Two Different Walks of Life.

Additionally, Johnson is the Editor at Large for Success News. She has a monthly column in Temptation Magazine and Dimez Magazine.

She is also the owner of an online learning company, CHERIEJ.COM. It helps learn film, acting, casting and creative skills to achieve personal and professional goals by providing individual, coaching, academic and entertainment.

The 41-year-old Cherie seems pretty picky when it comes to sharing details regarding her personal life. However, Johnson is reportedly is married and a mother of two daughters.

She was once involved in a case regarding racial profiling. Cherie at the time was with Dennis White, her husband. Officer Shad Barfield stopped them based on the colour of their skin, accused the pair. They were on their way to Myrtle Beach for a quick romantic getaway.

The officer at first claimed to have a warrant in Johnson's name. She told HLN,"After the officer told me that he did not have a warrant for my arrest, he started asking me about drugs for the third time, I said, 'Are you doing this because we're black?".

The story received nearly 700,000 views, by the next day, making it the fourth most-viewed iReport of all time.

Cherie is also a big fan of sports, her favourite is American football team Pittsburgh Steelers. Besides, she is also a fan of NBA player Paul Pierce. Johnson also loves to read, write, paint, eat and travel, and music.

Johnson is an American actress, writer, and film producer as well. She has made a good sum from her prolific career. Her current net worth is $1 million.