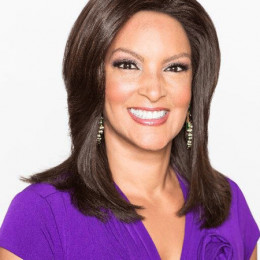 She is a news anchor at WLS-TV located in Chicago. Her broadcasting career began with WGN TV located in Chicago in the year 1989. She also has appeared in a TV series titled “Simply Elegant”. She earned her B.S. in Psychology and Biology from the University of Illinois at Champaign-Urbana. In 2004, she was honored with the Russ Ewing Award by the Chicago Association of Black Journalist for her coverage on the E2 nightclub tragedy.

Burton belongs to the Black Ethnicity and Nationality-wise, she is American.

Burton received her B.S. in Psychology and Biology from the University of Illinois at Champaign-Urbana.

Burton's broadcasting career began at WGN-TV as a co-anchored in a nationally syndicated weekly series" MBR: The Minority Business Report", in 1989.

In 1990, Burton moved to Peoria, Illinois where she worked as a reporter at WMBD-TV.

In 1992, Burton has been working for ABC 7 Chicago (WLS-TV) in Chicago, Illinois. She also anchors the station's 5 p.m. newscast with Alan Krashesky. Burton also worked as a contributor on the 10 p.m. newscast.

In 2003, Burton promoted to 5 p.m. weekday co-anchor and to 10 p.m. as a contributing anchor with Kathy Brock and Ron Magers.

Burton was part of the Chicago Honey Bears cheerleading squad for the Chicago Bears for three seasons from 1983-1986.

On 23rd April 2008, Burton with 4 others (5 separate attacks), was injured after a man punched them in the head or face while she was on her dinner break.

Burton was hit by a punch in the head from Perdue which knocked her to the ground. She told she suffered from headaches for months following the attack but X-Ray and CAT Scan revealed no severe damage.

Perdue was found not have a guilty on five counts of aggravated battery. Until April 2015, The judge instead remanded Perdue to the state Department of Mental Health.

Membership and other Works

Burton is a member of Delta Sigma Theta Sorority. In 2007, she was the first alumnus inducted into the school's hall of fame.

Burton is a board member of the Life with Lupus Guild.
From 1986 until 1995, Burton was married to ABC 7 sports reporter Jim Rose.

Burton is also a public speaker for the students of the Chicago Public Schools. She is a participant in the Rush-Presbyterian/St. Luke's fashion show.

Burton became the first recipient of the 2005 "Sisters in the Spirit" Award; a religious award. In 2008, she won the NABJ (National Association of Black Journalist) Salute to Excellence International.

In 2004 and 2005, Burton was honored with the Thurgood Marshall Award. In 2004, for her coverage of the E2 nightclub tragedy, the Chicago Association of Black Journalist (CABJ) honored her with the Russ Ewing Award.

In 1998, Burton honored for her profession with the Kizzy Image and Achievement Award.

Burton received the Phenomenal Woman Award in 1997. For her coverage of the Million Man March, she won CABJ award.

Burton also volunteers for the Boys and Girls Club of America.

While Burton worked as a 'Chicago Beer cheerleader ' in 1983 to 1986 and during that time she dated Jim Rose, a sports anchor currently works for ABC 7 Chicago (WLS-TV) an ABC 7 sports reporter.

Jim proposed Burton after her dance with the Honey Bears. She was sitting with Rose under the moonlight when Jim reached into his pocket for the ring.

Jim Rose proposed Burton with a diamond ring on the Friday night before Super Bowl XX in New Orleans, a moonlight propose aboard the President riverboat, scene of a pep rally party for the Bears.

The couple exchanged a vow in 1986 at an intimate ceremony but the couple couldn't handle their relationship and had a divorce in 1995. During their time of togetherness, the couple didn’t have any children together.

Cheryl has an amazing net worth same like her career. She succeeds to earn a huge amount of net worth around 30 million US dollar.

He is a ABC 7 sports reporter, who proposed Cheryl with a diamond engagement ring on the Friday night before Super Bowl XX in New Orleans. Dates of their marriage and divorce are unknown.

He is the second husband of Cheryl. Details about their marriage and their current status are unknown.