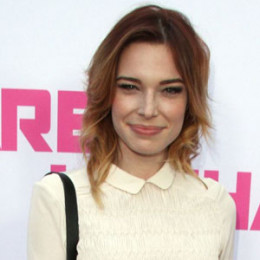 Chloe Frances Dykstra is an American actress and model. She produces and co-hosts a web series "Just Cos," for the Nerdiest Industries YouTube channel and is a cast member of the SyFy show Heroes of Cosplay. She is also a freelance game journalist for a number of websites.

She opened up about emotional and sexual harassment by her ex-boyfriend via an essay published on Medium in June 2018. Later, she issued a statement about the matter via Twitter post.

Chloe Dykstra's Personal Life: Is She Dating a Boyfriend?

Chloe is not married yet and does not have a husband, However, according to some source, she is in a relationship with her reportedly boyfriend, Sam Witwer. They have been dating since the year 2015 but it does not seem like the couple has decided to step up and get engaged.

There was no decision about them getting engaged. In the past, she dated Chris Hardwick and Robert Kazinsky.

Hey dudes. Just a reminder: I 100% stand by every single word of my essay. I made sure it was unembellished, factual, and that I had evidence to back it up in order to protect myself in case of ACTUAL litigation (not a network investigation, where I’m not protected). That is all.

She allegedly stated that her former boyfriend abused her sexually and emotionally via an article on Medium. Though she didn't named her ex-boyfriend who pressurized her for sex and ultimately derailed her career, her words on the essay just connected the dots to the Nerdist co-founder.

In her essay entitled  “Rose-Colored Glasses: A Confession", she confessed that the man forced her for sex against her will. She wrote,

"To be fair, I did go along with it out of fear of losing him.” She added that “after three years of being snapped/yelled at constantly, very rarely being shown any affection- I finally left him.”

Following the publication of the essay, her former boyfriend Hardwick was removed from 'Talking Dead. Later he was reinstated back in the show.

In the beginning, she received many supportive messages via Twitter but it was just the opposite afterward.

"Then the tide kind of shifted. I was attacked relentlessly. There was an organized group of people online whose sole purpose was to try to disprove me. I was terrified people were going to figure out where I lived."

She admitted that she contemplated suicide after being harassed on th =e social media.

She amassed a net worth of about $1 million at present.

Chloe is the daughter of Cass McCune and John Dykstra. She has worked in different movies and TV shows and has shined brilliantly.

Chloe worked for some huge video game as well and also worked as Aela the Huntress for one of the best games called Skyrim.

She is best known as the cast member of the SyFy show Heroes of Cosplay.