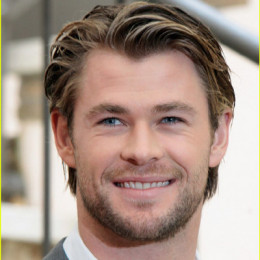 An Australian handsome and hot actor who is best known for his role as Thor in the Marvel Cinematic Universe films Thor (2011). He has also appeared in other famous movies like Star Trek , A Perfect Getaway, the horror comedy The Cabin in the Woods etc. He is son to mother, Leonie who works as a teacher of English and father, Craig Hemsworth who worked as a social-services counselor. He completed his high school from Heathmont College. He has starred in different TV series like Guinevere Jones in which he is portrayed as King Arthur.

He was chosen by People magazine as the Sexiest Man Alive in 2014. Girls adore him for his deep resonant voice, light bold blue eyes, muscular physique. His name has been linked with many celebrities. Talking about his personal life, he is already married to his longtime sweetheart. Until now he has not involved himself in any kind of affair which can ruin his married life, which proves he is very loyal to his wife. Together the couple is blessed with three children.

Occupationally, she is a Spanish actress. They first met each other in 2010 through mutual representative. After dating for few months, they got engaged and finally got married. Together they are parents of three children.

She is the eldest daughter of the family and she is very cute and beautiful.

He is very cute and adorable. He has got one twin brother.

His picture along with his twin brother can be found in different sites.