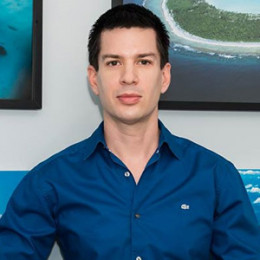 Chris Krolow is an American TV show producer and a reality star. He is also a private island expert and has made his appearance on the HGTV show called Island Hunter. Chris owns his own island in Fiji and Ontario. Not only this, he is a sensational entrepreneur and has sold thousands of Island to many couples and businessman. He is a CEO and founder of Private Island Inc. According to the sources, he is rumored to be gay.

Chris Krolow was born in Toronto, Canada and belongs to a Caucasian race. Later, he moved to the United States of America and became a citizen of the US.

He studied International relations and tourism and then pursued a career in the related field. In 1999, he founded his own company called Private Island Inc. which mainly focuses on selling Private Islands. Till now, his business has sold island worth millions of dollars.

From the company, he has traveled the world working tirelessly to develop cross-platform marketing and strategic partnership to unify the geographically diverse and specialized industry.

Along with two other enterprises, he not only created an organization network of top island broker, but he is also the executive producer and host of HGTV’s hit series Island Hunters and the publisher of the biannual glossy magazine Private Island.

Later, Island Hunter became an extension of HGTV’s popular show House Hunter in 2013 along with John Beach and Adam Mckie. He has 31 episodes to his credit in the show which showcases exotic islands to the potential buyers.

Moreover, he owns three islands: one in Fiji and two in Ontario, Canada which he rented mostly for couples and businessman earning a decent amount.

According to the sources, Chris is rumored to be a gay, but till now, it is not sure either he is a gay or not.

He is not yet married and seems to be single. It looks like he is fully committed towards his work rather than being in a relationship. Also, he has maintained secrecy regarding his love life and maybe doesn't want to share about his girlfriend or possibly a boyfriend to the world.

Chris has successfully earned a good sum of net worth from his career in hosting reality shows.  He has spent more than twenty years in the related field from which he obtained a reputation as a wealthy businessman.

Though he his net worth is not yet published in social media, looking at his lavish lifestyle he surely has a net worth in millions.