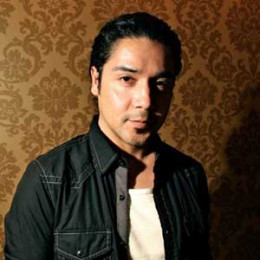 Chris Perez is an American guitarist, songwriter and recently an author is known as the member of Selena y Los Dinos. He has established himself in the field of music. Perez is one of the most praised guitarists. He won Grammy Awards in various categories. He is currently single. Perez is also best known as the widower of Selena, the Tenajo legend.

Chris was born on 14th August 1969 in San Antonio, Texas as Christopher Gilbert Perez. He was born to mother, Carmen Media, and father, Gilbert Perez (a computer programmer). Chris is of Mexican American origin.

When he was four, his parents divorced, and her mother remarried in 1978. With the support of his mother, he learned to play French horn during his middle school and latterly joined the school's band.

At that time the society had a bad view of rock and roll music, so his mother didn't allow him to learn electric guitar. Despite the disagreement, he learned himself and started playing electric guitar.

To build the career he ran away from his home to California when he was 17. Chris then shared an apartment with his father and started working in a library. After that, he was asked by Tony Lares to join his cousin Shelly Lares' band in 1986.

At that time Shelly performed Tenajo music, a mixture of folk music and countryside music in both English and Spanish language. Perez didn't like Tenajo music, but he eventually joined the band because it was paying more than his library job. After Tony had left the band, Chris became the music director.

In 1991, Chris was arrested by the police in accusation of driving under influence and speeding along with friends and cousin. During that time police had an altercation with his cousin and Perez came to his aid. After the fight the police let the friends go and handcuffed Chris and his cousin.

However, the cops made a false case of a high-speed chase. At the end of the day, Chris was sent home with no charges. He told the situation to his band including Selena which helped in building more trust towards him.

Some months after his arrest, Chris along with the two band members, to a hotel. The two members got intoxicated and started wrestling in which Chris also joined. Later Chris decided to go home with the room totally damaged.

Moreover, in the morning he along with two brothers were fired from Selena y Los Dinos band, A.B Quintanilla also forbade Selena from seeing Chris.

Chris and Selena started dating during the trip to Mexico. Furthermore, they got married in 1992 secretly. Selena's father was against their relationship before marriage but accepted after they tied the knot.

Unfortunately, their happy life was crumbled on 31st March 1995 when Selena was murdered by her own boutique employee named, Yolanda Saldivar.

Yolanda was imprisoned for a lifetime. As Selena was the star of the industry and an amazing singer with blockbuster albums, the former President Geroge W. Bush at that time announced Selena's birthday as Selena Day in Texas.

Many years after Selena's demise, Chris met Venessa Villanueva through a mutual friend, John Garza in 1998. They started seeing each other and married in 2001. The couple had two children, Cassie Perez (daughter) and Noah Perez (son). Chris posted several cute photos with his babies.

This relation also did not last for a long. In 2008 the pair separated, and the reason was Chris's drinking problem. Chris had to give up all of his assets to Venessa as spousal support.

The famous guitarist, Chris Perez has an estimated net worth of $10 million. He is earning much from the shows, band and recently a book too. Chris has 27.9k followers on Twitter and 168k followers on Instagram.

Selena and Chris were in the band Selena y Los Dinos. They secretly married in 1992. But their love life was shattered on 31st March 1995 when Selena was murdered by her own boutique employee named, Yolanda Saldivar. This was a heartbreaking news for all her fans as well as his husband.The former president Geroge W. Bush at that time announced Selena's birthday as Selena Day in Texas.

An American personality, Vanessa Villanueva and Chris Perez married in 2001 and have two children. Due Chris's addiction towards drugs and alcohol, Venessa filed divorced and separated in 2008.

Chris Perez and Vanessa Villanueva have a daughter named, Cassie Perez. She is the elder child of the ex-couple.

Noah Perez is the second child of Vanessa Villanueva and Chris Perez. Noah was born before his parent's divorced.