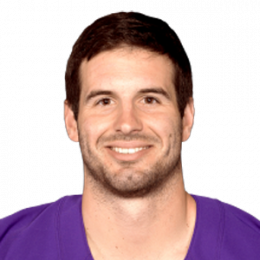 Christian Andrew Ponder is an American football quarterback for the San Francisco 49ers. His father, David Ponder, played college football for Florida State as a defensive lineman from 1980 to 1983, and thus Christian Ponder is one of several father-son duos who have both played for Bobby Bowden. On August 16, 2016, Ponder signed with the San Francisco 49ers on a one-year deal following a season-ending injury to Thad Lewis and the unknown health status of Colin Kaepernick. The contract is worth $800,000 and includes no signing bonus or guarantees. Ponder had previously worked out for the Cardinals just days before the 49ers called him.

Ponder is married to ESPN reporter Samantha Steele. They tied the knot after two months of their togetherness. She was previously linked to Cincinnati Reds OF Drew Stubbs, but no concrete evidence ever surfaced in regard to that relationship. They are now living a happy married life and there are no any sign of separation or anything at all. To get in touch with his personal life we can follow him on Twitter @cponder.

The couple first started seeing each other after Ponder messaged her on Twitter. After two months, the couple decided to get married, driving to a Hudson, Wisconsin courthouse before having their wedding meal at Arby's. The two held a formal ceremony the following April.

Their first child, a daughter was born July 22, 2014. Bowden Ponder was named after Christian's college football coach at Florida State, Bobby Bowden and also goes by the name "Scout" derived from Samantha's favorite novel "To Kill a Mockingbird."