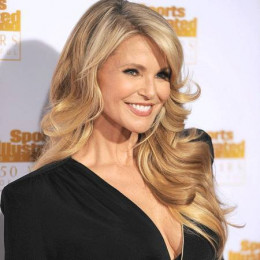 She is an actress, model, photographer, writer, designer, animal, and human right activist. She came to prominence in the late 1970s with 3 consecutive Sports Illustrated Swimsuit Issue covers through 1981. This gorgeous lady has appeared on over 500 magazine cover and has spent 25 years as the face of CoverGirl. In February 2012, she was #3 in the Daily Mail list "World's 20 richest models".

More to that, she has three children from her previous relationships; two daughters, Alexa Ray Joel and Sailor Lee Brinkley-Cook and a son, Jack Paris Brinkley Cook.

Christie Brinkley holds a net worth of $80 million as of 2019. The main source of her income is from her career as an actress, model, and entrepreneur.

Christie Brinkley was born on February 2, 1954, in Monroe, Michigan, the U.S. to Marjorie and Herbert Hudson.

He is the first husband of Brinkley, who met her while she was in France. Personal details about him has not been disclosed yet.

He is a singer, songwriter, pianist and composer. They were married on a yacht on the Hudson River.

He is a Real estate developer. They together survived a helicopter crash in March 1994 near Telluride, Colorado.

They were first introduced by their mutual friend NBC's Jill Rappaport. Due to some trust issues they got separated.

She is the first child of Brinkley, whose name "Ray" was given in honor of Ray Charles. She currently is a singer, songwriter and pianist.

He was born safe and healthy. He was later adopted by Peter Cook and named him Jack Paris Brinkley Cook.

She was born healthy. Her mother won sole custody of her, and later her father paid $2.1 million as a compensation.