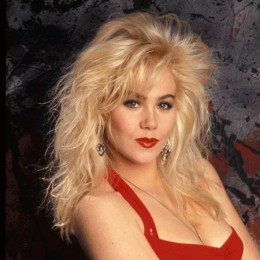 An American Emmy award-winning actress and dancer who is better known for starring as a saucy daughter, Kelly Bundy, on the television comedy Married...with Children. She is also popular for her role as news reporter Veronica Corningstone in the hit comedy Anchorman: The Legend of Ron Burgandy. She is the daughter to Robert William "Bob" Applegate and Nancy Lee Priddy. Since her mother was an actress she debuted into the acting industry at a very young age in the soap opera Days of Our Lives with her mother. She also made a guest appearance in shows like Father Murphy, Charles in Charge and Silver Spoons. She got her first lead role in TV series Up All Night. She has played in the major role in popular movies like Grand Theft Parsons, The Big Hit, The Sweetest Thing, Don't Tell Mom the Babysitter's Dead and so on. in 2009 she was awarded people's Choice Awards for Favorite Female TV Star for her role in "Samantha Who?".

Christina Applegate is living a blissful married life with musician husband Martyn LeNoble for more than a decade now. The duo is blessed with one child.

Christina Applegate has been married to Martyn LeNoble since 2013. She began dating LeNoble since 2009 and later engaged on Valentine's Day 2010. It was the second marriage for both of them. Christina and Martyn are the parents of an adorable daughter, Sadie Grace born on January 2011.

Christina Applegate is a married woman. Her first marriage was to Johnathon Schaech. The couple's wedding ceremony was held in Palm Springs, California. After a decade of their marital relationship, she filed for divorce citing irreconcilable differences. They parted ways in August 2007.

Christina Applegate accumulates millions of dollars through her career as an actress. She generates thick amount for appearing in television series.

Christina Applegate has an estimated net worth of $20 million. She receives a salary of $125 thousand per episode for appearing in TV series Up All Night.

The 47-year-old actress currently resides in Hollywood, California. She shares a lavish house with present husband Martyn in California.

Applegate was the spokesperson for the Lee National Denim Day through which she raises funds for breast cancer education and research. That's not all, the starlet founded Right Action for women, a charitable foundation dedicated to breast cancer screening for women. She focuses on the type of MRI scan that saved her life.

They dated for about 4 years before tying the knot. After ten years long relationship she separated with him citing irreconcilable differences.

After dating two years he purposed her to marry him at beach in Palm Springs. In an interview she stated that he was by her side and supported her throughout her cancer battle. Together the couple is blessed with one beautiful daughter.

She is very beautiful and gorgeous. She resembles more like her mother.