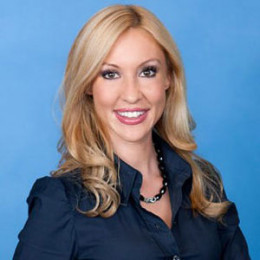 Christina Loren is a well-recognized meteorologist who currently is serving at RFD-TV network.

Loren began her career working for different stations such as Bakersfield, Chico, and Palm Springs, California. She became a weather forecaster while studying at California State University. Later she joined KHSL and KNTV. She also worked for NBC in, San Francisco, and CBS in Miami. In 2015 she joined RFD as a host of the weather forecast. She also featured in The Market Day Report show alongside Joe King. She is still an employee at RFD performing her work skillfully.

The beautiful blonde Christina married Juan Bella on August 6, 2014. They held their marriage ceremony in Hawaii. Despite being married for nearly three years the husband and wife are yet to have children.

During their vacation, two big hurricanes occurred in their vacation site, an island state of United States. However, she never failed to do her job even on her leave and reported on the event as soon as possible. The couple is living a contented and blissful married life.

Christina earns a lucrative amount from her career as a weather forecaster. She has worked for reputed networks such as CBS and NBC, from which she must have probably drawn a good sum of salary. Her exact net worth is not yet known but she possibly has a net worth not less than seven figures.

Juan Bella is the husband of Christina Loren. The duo tied the knot in the year 2014.