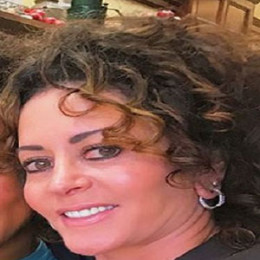 Her husband Walker played college football at the University of Georgia. He won Heisman Trophy. Walker attended Johnson County High School in Wrightsville, where he played football, basketball and competed in track.

Cindy Grossman was born in 1962, in Florida, United States of America. She is the daughter of Thomas DeAngelis. Thomas is a retired real estate agent from Cocoa Beach.

She belongs to the white race and holds an American nationality. She went to Cocoa Beach, Florida and did a major in Business.

Cindy is very secretive regarding her professional life and prefers to talk less with media, so there isn't concrete information related to her profession. However, she is a former member of the Georgia women's track team.

Cindy Grossman met her ex-husband Herschel while he was icing his ankle in a training room. Apparently, his sister, Veronica who happened to be on the same track team as Cindy introduced the couple to each other. The couple later dated and eventually decided to get married. They got engaged in 1983.

During the 1980s, he had to undergo a shoulder operation. He said in an interview, how Cindy was the only one who stood by his side during the whole operation.

Cindy used to accompany her fiancee in many award events. She was by his side in numerous ceremonies. Soon the couple exchanged vows in a private ceremony on March 31, 1983. became parents to a son, Christian Walker.

In 2002, Cindy and Walker divorced due to her husband's Dissociative Identity Disease (DID). Her ex-husband Walker tried to kill himself and her many times during their marriage.

Cindy's ex-husband Walker clearly admitted that he suffered from the disease and once pointed the gun towards her. Although, his wife didn't know about his problem.

Other incidents that Cindy remembers while she was pregnant her ex-husband Herschel was dressed in a full sweatsuit, tights, sweats, jacket, and he was running through the house. Soon the Former NFL player said that he might hurt her

Grossman didn't know about Walker’s disease then and thought that something is wrong in his head. But soon after she found out he was suffering from DID. When the couple was together, life was not easy for her. She recalls the memory remembering the different sides and voices of her husband.

"It's hard to explain, but even his physical countenance would change. There was also a very sweet, lovable. That's the one he told me I married. He told me I didn't marry Herschel.".

Herschel had battled with multiple personality disorder for a long time. In this disease, people sometimes assume them to have a split personality. There have been reports when Cindy Deangelis Grossman’s husband tried to kill himself and his ex-wife due to his disease. This was one of the reasons why Cindy wanted a divorce with him.

Grossman and Walker were married for 16 years. The reason for their separation is simply Cindy not able to know why her husband was reacting like that. Sadly, after their divorce, she came to know he was suffering from DID.

Despite their separation, the couple is co-parenting their son, Christian Walker. Many people first assumed that Christian will follow the footstep of his father but he surprised everyone when he decided to become a cheerleader.

His parents supported his decision and motivated him to do whatever he wants in life.

Cindy never talked much about her net worth but her ex-husband has maintained a good sum of net worth from his career of $12 million. The majority of his income through his contracts with several teams.

He used to earn over $1 million every year from his annual income. In 1986, he signed a five-year, $5 million contract with the Dallas. In addition, the team also provided him with one sport-utility car and his wife, Cindy got a luxury vehicle for himself.

The club also provided them with a house in Edina, which he and Cindy shared before their tragic separation. She once owned an apartment in Athens, Georgia. The average price of a condo in Athens is around $100,000.

Cindy DeAngelis Grossman married to Herschel Walker on 31st March 1983 and the couple divorced in 2002.He is famous player.

This couple has a son named Christian Walker .