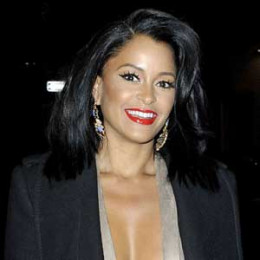 Claudia Jordan is the reality TV personality, actress, radio personality plus model. She is also a business entrepreneur as she opened her own business of trendy handbags and lipstick. Jordan is the reality queen as she appeared in many reality shows. She was dismissed from the job as she filed a case against the HR of the company for harassment and racial discrimination. Jordan is now in relation to Medina Islam, an actor.

Claudia Jordan was born on 12th April 1973 in Providence Rhode Island as Claudia Angela Jordan. Her parents firstly met (when her father was in U.S Air Forced) in an air force station in Brindisi, Italy. Claudia is of mixed ethnicity as her mother is Italian and father is an African-American.

Jordan was raised in Providence Rhode Island and joined a local school, East Providence High School. While she was in school, she was selected for the All-State Track and Field Team. Later on, she participated in three Junior Olympics and secured the third position in the long jump at East Coast Invitational. She was praised by all-American honors in 400m relay race and also was a sprinter.

Claudia earned a degree with major in journalism and broadcasting from Baldwin Wallace College, Ohio. During her course of graduation, she had her own campus radio program.

In 2005, she made a comeback from the game show, NBC Primetime Game Show Deal or No Deal as one of the 26 briefcase models. She was entitled as Model #1 at the end of the show in 2009. During the same year, she also co-hosted Miss Universe Pageant with Billy Bush. She then co-hosted many shows like- Tiny Tonight (VH1 talk show), Reach Around Radio, The Ricky Smiley Morning Show. She was also the host of her own radio show, The Foxxhole.

Besides these, she was also seen in the second season of Celebrity Apprentice and even in a reality show, The Next. Claudia even did commendatory as HLN's Dr. Drew On Call and Maury Povich Show.

Claudia has her own lipstick and handbag collection which can be bought at claudiajordan.com and theclaudiajordancollection.com.

Claudia filed a case against the HR of The Price is Right accusing him of sexual harassment and racial discrimination. Later on, she was dismissed from the show after the case was filed. The case was settled with she receiving a certain amount which has not been disclose..

Claudia Jordan was married to a featured film producer, Datari Turner on 28th November 2009 and after a year they got divorced on 29th December 2010.

Currently, she is in a relation with Medina Islam and was rumored that the pair were getting engaged. They were once caught kissing together outside a club.

Claudia Jordan has an estimated net worth of $500,000. But as per her works and business, it might be more than that in future. She is earning much from her shows and also from her business too.

Claudia Jordan and producer, Datari Turner got married on 28th November 2009 and separated on 29th December 2010. Their relation was annulled.