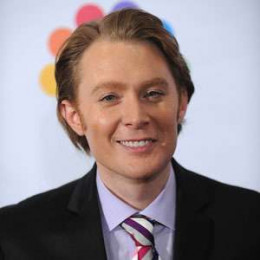 Clay Aiken is an American actor, singer, songwriter, author, and politician. He was the 2014 Democratic nominee in the North Carolina second congressional district election. Aiken won the Democratic primary held on May 6, 2014, but lost to Republican incumbent Renee Ellmers in the general election on November 4, 2014. Aiken rose to fame when he competed and became the runner-up on the second season of American Idol in 2003. In 2014, Aiken announced his intentions to run for Congress in North Carolina's second congressional district. As a young boy, Aiken sang in the Raleigh Boychoir; and, as a teenager, he sang in school choirs, church choir, musicals and local theatre productions as well. After high school, he joined a local band 'Just By Chance,' as a lead vocalist. The band co-hosted and performed at "Just by Chance and Friends" shows in Dunn, North Carolina.

On 8th August 2008, Clay Aiken announced on his personal blog, the birth of his son in North Carolina: "My dear friend, Jaymes, and I are so excited to announce the birth of Parker Foster Aiken." The child's mother, Jaymes Foster, is the sister of record producer David Foster. After several years of public speculation, Aiken came out as gay in September 2008, during the interview with People magazine. In April 2009, Aiken was honored by the Family Equality Council advocacy group at its annual benefit dinner in New York City. On 18 November 2010, Aiken went to Washington, D.C., on behalf of Gay, Lesbian and Straight Education Network (GLSEN) at Capitol Hill, and briefly talked about anti-gay bullying.

Aiken and Foster are best-friend and not officially married but she is the mother of Aiken's first son.