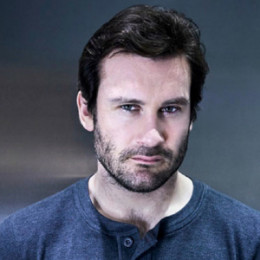 Clive James Standen, recognized as Clive Standen is a British actor. He is best known for role in the TV series such as Vikings, Starz, and Camelot. Apart from series, he has played in different Hollywood and Bollywood movies including Tom Brown’s Schooldays, Namastey London, and Everest. He is a proud parent of three children along with wife, Francesca Standen.

Clive Standen was born on 22nd July 1981 to British parents in Hollywood, County Down, Northern Ireland. He grew up in the Leicestershire, East Midlands, England and he did his schooling from the King Edward VII School, Melton Mowbray followed by a performing arts course at Melton Mowbray College.

Then he went to earn three years diploma course in Acting at the prestigious London Academy of Music and Dramatic art. He is also a former international Muay Thai boxer and Fencing gold medalist.

At the age of 12, he experienced stunts, horse riding, and sword fighting for the first time. During the period, he got his first job as a professional stunt team in Nottingham. He became the member of both the National Youth Theater and the National Youth Music Theater performing in productions when he was 15.

Standen made his TV debut on the British television police procedural crime drama series, Walking the Dead created by Barbara Machin. It was produced by the BBC featuring a fictional London-based Cold Case unit, that starred Trevor Eve, Sue Johnson, Wil Johnson and so on.

In 2005, he was seen in the medical soap opera, Doctors created by Chris Murry. After playing few roles, he landed a role in the movie, Tom Brown’s Schooldays which is a television film adaption of the Thomas Huges novel of the same name.

In 2007, he made his Bollywood debut in the Indian drama movie, Namastey London which was directed and produced by Vipul Amrithal Shah. The film starred Akshay Kumar, Rishi Kapoor, Katrina Kaif, Clive Standen and so on. It was one of his successful hit movies that received box office collection of around $714 million at the end of the year.

Though he played several TV series and movies, he received popularity from the historical drama television series, Vikings written and directed by Michael Hirst in 2013.

He also made his presence in the Baltasar Kromakur’s directed and produced British-American biographical adventure movie, Everest. The movie was based on the real events of 1996 Mount Everest disaster and focuses on the survival attempts of two expedition group one led by Rob Hall and the other by Scott Fisher.

He has also made appearances in the theater play including The Invention of Love (in 2006), West Side Story (in 2000) and The Ballad of Salmon Pavey in the Shakespeare’s Globe Theatre (1999-2000). He was last seen in the fantasy-horror thriller movie, Patient Zero and American drama series, Taken.

Apart from acting, he did voice-overs for video games such as Aliens vs. Predator, Inversion, and Tom Clancy’s Ghost Recon: Future Soldier. He is also a spokesman for non-profit, marine conservation organization, Sea Shepard Conservation Society.

Talking about Clive Standen’s personal life, he is married to wife Francesca Standen, since 2007. A decade as husband-wife and still the pair share a strong bond. No such rumors regarding their divorce have emerged which suggest that they are happy with their relationship.

Now, the couple is proud parents of three children: Hayden, Eid, and Rafferty. All three children are grown-up now, and the actor usually stays at home to spend time with his family.

Besides his career, he manages time for his family and still cooks for his wife during the weekends. He would often prepare delicious meals and enjoy candlelight dinner.

Clive Standen's movies have earned a huge sum of the collection in box office such as Everest collected $203 million and Namastey London collected $714 million. He must have probably earned a good sum from those movies. His lavish way of life suggests that his net worth is more than seven figures.

Clive Standen is married to Francesca Standen, since 2007. The couple has been together for more than ten years and is proud parents of three children.

Born in 2003, Hayden Staden is the elder son of Clive Standen and Francesca Standen.

Born in 2007, Edi Standen is the one only daughter of Clive Standen and Francesca Standen.

Born on 2011, Rafferty Standen is the youngest son of Clive Standen and Francesca Standen.