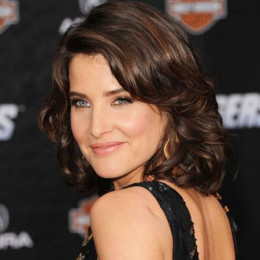 Cobie Smulders is a gorgeous Canadian actress who is widely famous for her role as Robin Scherbatsky in the hit TV series 'How I Met Your Mother'. She was born to a Dutch father and an English mother. She was named after her great-aunt. When she was at school, she was a very keen listener of French. Though she started her career as a model, according to her, she hated modelling because she had to face people judging her physically. Later she quit modelling and joined University of Victoria. She debuted in TV by starring in Showtime science fiction series Jeremiah. She has also starred in a movie named 'Captain America: The Winter Soldier' which turned to be a blockbuster movie. She was also ranked on 2011 Maxim list of Hot 100 Women.

There was rumor that she can't give birth to any children after she was diagnosed with ovarian cancer but after undergoing various treatment she welcome two children with her husband. Yes she is married woman and she got married to her long-time boyfriend with whom she dated for 5 years. Together they are example of the perfect couple. The couple is already blessed with two beautiful children.

Professionally he is an American actor, voice actor, comedian, and a singer. After dating for 5 years they turned their relationship into marriage. The couple is blessed with two daughters.

She is the eldest child of the family. Cobie Smulders has given birth to a really beautiful child.

She was recently born in January 2015. Her name has not been made public yet.