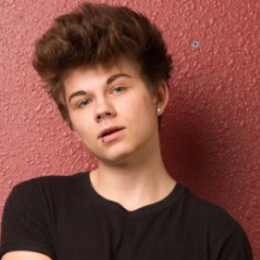 American social media star, Cody Herbinko, rose to fame after he regularly posted pictures on Instagram. The numbers of follower increased as more people started to like the photos he posted. He is popularly known by the nickname, murderized. As of now, Herbinko is dating his YouTuber girlfriend, Samantha Eklund. The couple appeared together in several YouTube videos of Eklund.

Cody Herbinko was born Cody Lewis Herbinko on 11th February 1999 in Pittsburgh, Pennsylvania under the birth sign Aquarius. Herbinko is American as per nationality and is of White ethnicity. In his freshman year, he stopped attending public school so to gain an online education.

Herbinko received some good comments as well as some negative ones. Due to some bad remarks about him, he deactivated his social media for some time.

Later, Herbinko came back with a new online alias, ‘’murderized.’’ He then started posting several gaming videos on his YouTube channel. In 2015, he joined the Boys Summer 2015 tour with Devin Hayes and with other rising stars.

Cody Hebinko is in a relationship with Samantha Eklund. The couple started dating in 2015. Eklund is a YouTuber who uploads various videos related to makeup tutorials, hauls, and fashion. The pair is often featured in the YouTube videos of Eklund.

Back in 2016, Herbinko was rumored of cheating on his girlfriend and taking advantage of young girls. He later, claimed that those buzzes were fake.

Cody Hebinko has an estimated net worth in six-figure amount. He earned much from his YouTube channels and other sources.

Below, in the video, Cody Hebinko talking about the bad comments: