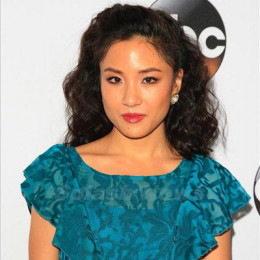 Constance Wu is an American actress. Currently, she can be ssen acting in a comedy series named Fresh Off the Boat of ABC channel. She had graduated from State University of New York. She made her professional debut in acting since 2006 with the role of Stephanie Daley. Besides, she has also appeared in the episodes of television series named Torchwood, Covert Affairs, Law & Order: Special Victims Unit etc. She had a recurring role on a soap opera named One Life to Live of ABC channel.

She is still single. She has never been married or has any child. There is no any records or history on her past affairs. She has been very secretive and loves to keep her personal life into low key profile. She does not like public interest on her private life thus has requested her fans to respect her privacy. She has never been pulled in any scandals and controversies till date. She has also not been pulled in any rumors regarding her affairs.

Constance Wu was born Constance Tianming Wu on March 22, 1982 in  Richmond, Virginia, in a Taiwanese family. She is American and belongs to the Chineses American ethnicity. She has three sisters.

Wu's family was emigrated from Taipei City, Taiwan. Her father was a biology and genetics professor at Virginia Commonwealth University and mother was a computer programmer.

Wu completed her graduation from  Douglas S. Freeman High School, where she began performing in local theaters at t Lee Strasberg Theatre and Film Institute. Later she attends the State University of New York and grabbed her bachelor degree in fine arts in 2005.

After finishing her college, she studies  psycholinguistics and almost attended a graduate degree program in speech pathology at Columbia University.