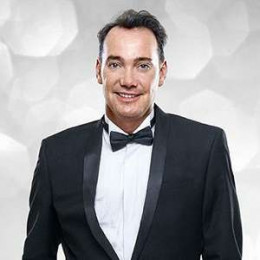 An Australian-British dancer, choreographer and theater director, Craig Revel Horwood is currently married to Damon Scott, a British entertainer, since 2013. Craig got trained in his hometown and began his career as a dancer in Melbourne and he moved to London. At the age of 17, he made money by appearing as a drag queen in bars and clubs. Craig directed the UK Tour of "Strictly Come Dancing."

Craig Revel Horwood is openly a bisexual man. He was previously married to Jane Hallwood. They got divorced after two years of marriage. After the divorce, he started dating Damon Scott and married him in 2013. His partner Damon Scott is an entertainer of ITV. Craig has written many books including "Tales from the Dance Floor", "Ballroom Dancing", and "The Ballroom Dancing: Teach Yourself".

Craig first got married to Jane Hallwood in 1990. They divorced after two years of marriage without revealing the reasons of the divorce.

Damon Scott is an entertainer of ITV channel. He is a singer and comedian as well. They publicly revealed their homosexual relationship.