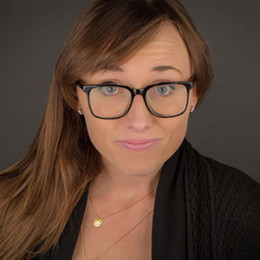 Cristian is a youtube sensation known for her channel Teeny Z. After completion her bachelors from North Carolina School of the Arts in design and production, she has spent several years working at multiple professional opera companies around the world. Along with managing her local event production company Teeny Z as operational manager she consider herself as full-time mom, aunt, wife. Christian has two brothers as her sibling.

Christian is married to youtube star Simon Bentley. They have been married since 15 October 2012. She is mother of two children. Her son is Jackson Bentley and daughter McKenzie Rose Bentley. She met her husband Simon while touring with her friend Colleen Evans popularly known as Miranda Sing. there's no rumour about her extra-marital affairs. To the date her confirmed relation is only 1 and thats with her husband.

Christina met Simon while she was touring with friend Colleen Evans. Engaged in 17 June, 2011, they tied knot a year later. This couple have been married for 3 years and are managing their youtube channel together. Together they have 2 children.

Born on March 25, this 3 year old boy is first child of Cristina and Simon. They first featured him on their YouTube channel in a video called "Buh bye!" which was published shortly after his first birthday. He has been featured in videos on the Our Teeny Family channel called "A Day Alone with Jackson," "My Baby is SMART" and others. This young boy has a younger sister, Mckenzie.

Mckenzie is second child of cristina and simon. This 9 month old girl is also featured in her parents channel.