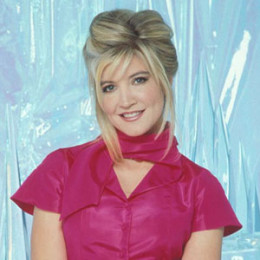 Crystal Lynn Bernard is an American singer, songwriter, and actress. She is known for her seven-year-long role on the comedy series Wings. Her main work has been on television, she has appeared in some films and has also pursued a music career. She began her acting since 1982 with television series, Happy Days. She is recognized by her fans for hissing noise she made whenever she sang which made it her signature move.

Crystal was born on September 30, 1961, to mother Gaylon Fussell and father Dr. Jerry Wayne Bernard, a televangelist who traveled across the United States preaching and singing. Her birthplace is Garland Texas and was raised in a Southern Baptist home.

Bernard attended Alley Theatre in Houston Texas where she studied acting. She did her high schooling from Spring High School and then enrolled at Baylor University where she studied acting and international relation. At very young age, Crystal started singing gospel songs with her elder sister, Robyn. Including Robyn, Crystal has two younger sisters, Scarlett and Angelique Bernard.

She started her career in television from the tenth season of ‘Happy Days’, where she played the role of K.C Cunningham.

She then appeared as a guest on various shows before being a cast member of the sitcom It's a Living. She then featured in the sitcom Wings, a show in which she appeared for the entire eight seasons.

Besides TV Bernard also made appearances in movies like Young Doctors in Love, Jackpot. She starred in Slumber Party Massacre 2, Welcome to Paradise and Grave Misconduct.

Crystal has also entered in into music industry with her first album “The Girl Next Door” in 1996 followed by “Don’t Touch Me There” in 1999. But here singing career didn't reach the heights of her acting career despite her efforts.

She has also been featured in the many theatre productions like a Los Angeles production of Crimes of the Heart, Marquis Theatre of Annie Get Your Gun and West Coast premiere of Barbra's Wedding.

Taking about Crystal's personal life, she was romantically linked with famous producer Tony Thomas. These two started dating each other in early 1994 and ended relation in 2005. They had a ten-year long affair and did not have children together.

Crystal was also linked with Peter Cetera. These two met while recording the romantic song called I Wanna Take Forever and has remained close friends to the date. But both of them have never admitted to dating each other.

The beautiful actor and singer has an estimated net worth of $5 million dollars.