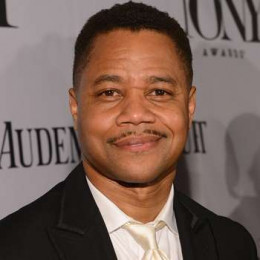 Cuba Michael Gooding Jr. is an actor of American nationality who is known best for his Academy Award-winning role in Jerry Maguire as Rod Tidwell as well as for his appearances on other films like The Fighting Temptations, A Few Good Men, Boyz in the Hood etc. Gooding earned impressive sum of net worth. He has always maintained a low-key personal life. Currently resides in LA, California, he is quite ambitious and hardworking.

Cuba M. Gooding Jr. was born on January 2, 1968, in  The Bronx, New York City under the birth sign of Capricorn. He was born son to Shirley (Sullivan), a singer and Cuba Gooding Sr., was a lead vocalist of the soul group The Main Ingredient. He has three siblings: April Gooding, Omar Gooding, and Thomas Gooding.

Regarding his nationality, he is American and belongs to the African-American ethnicity. At the age of 13, he became a born-again Christian.

In 1972, his family moved to Los Angeles after his father's music group had their hit single "Everybody Plays the Fool". Later his father left him and his mother raised him.

Cuba Gooding Jr started his professional entertainment career as a breakdancer and performed with Lionel Richie in 1984 Summer Olympics. He initially played guest roles in TV shows such as; Better Days (1986), Hill Street Blues (1987), and MacGyver (1989).

In 1996, he hit the silver screen with sports drama film, Jerry Maguire along with Tom Cruise which was a huge hit. He earned the Academy Award for the Best Supporting Actor for the movie.

He has also appeared in many TV shows, most of which were guest appearances. In 2016, he did an important role in The People v. O.J. Simpson: American Crime Story. The show was a success and received several awards.

Cuba Gooding Jr. has been married and divorced and is currently single as far as the news in the tabloids is to be taken into consideration. He was married to his high-school sweetheart, Sara Kapfer for about 26 years and has three children with her.

The couple has been divorced citing irreconcilable differences and since then he has not been known to be dating any girlfriend from the acting fraternity.

Gooding is a skilled hockey player and he loves playing in his free-time and even has a rink in his backyard.  He also loves vacationing with his family in Hawaii.

Cuba Gooding Jr. has succeeded to earned an impressive sum of net worth from his acting career as his estimated net worth $15 million. His 1996 movie, Jerry Maguire earns more than $273 million worldwide and became the ninth highest grossing film of 1996.

Kapfer is the high school sweetheart of Gooding. They got married on 1994 but were separated due to irreconcilable differences.

Spencer is the first son of Gooding with Kapfer.

Kapfer and Gooding's second child is a son.

Piper is the third child of Gooding.