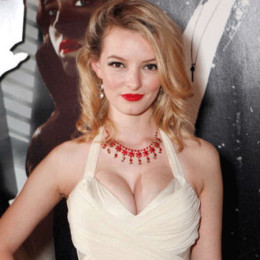 Dakota Blue Richards is a British actress and model, best known for playing in the film The Golden Compass, as Lyra Belacqua and in E4 teen drama Skins, as Franky Fitzgerald. In 2011, she posed naked for Oceans 2012, a campaign for overfishing and in 2013, she modeled for a commercial shoot of a new London-based fashion brand, "Immortal Sorapol" AW13. She is of German descent.

Accounting her personal life, she is definitely not married but she might have plans to settle down with someone perfect and deserving in the near future. These days she is dating a British actor. Till now, there is no record of her past affairs and other such relevant activities. She currently resides in Brighton, UK. There is no controversy related to her personal and professional life.