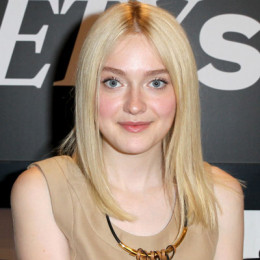 An American gorgeous and talented actress who rose to fame after her breakthrough performance in movie named 'I am Sam' in just young age of seven. She belongs to athlete family. Her mother Heather Joy was professional tennis player and her father Steven J Fanning used to play minor league baseball. She is the youngest actor to be nominated for a Screen Actors Guild Award at just age of eight. She graduated from North Hollywood's Campbell Hall Episcopal High School. She started her career in acting appearing in Tide detergent commercial at just age of five.

She was involved in controversy because of her role in movie named 'Hound dog' where she was seen in a rape scene. That movie was banned in many countries. She has not married yet. Regarding her personal life, she has not disclosed much information. She is confidential about her personal matters. However, according to a source she is in relationship. The news was confirmed when they were seen together in public.