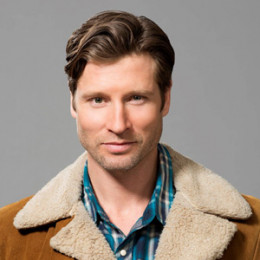 Damon Runyan is an American actor known for his work on Tv shows like Queer as Folk, Gangland Undercover, Nikita and Star Trek: Discovery. The handsome actor is a married man and is quite committed to his family.

Runyan made his screen debut in 2003 with the TV show Soul Food playing a small role. He then played many minor roles in several short movies and series like Queer as Folk, Smallville, Code Breakers, Supernatural, Nikita and so on.

Damon is happily married to his girlfriend, Jodie Dowdall. Even though he doesn’t say much about his personal life, he shared a photo of his wedding day dancing with his wife.

The duo has a daughter named Ruby Simone Runyan, born on 2nd March 2017.

Runyan certainly earns a decent amount from his career as an actor of popular TV series. His net worth is possibly not less than six figures.

Damon Runyan and his wife, Jodie recent became parents and currently are busy looking after their newly born daughter.

Ruby Simone Runyan is an adorable daughter and the first child of Dama Runyan and Jodie Dowdall.