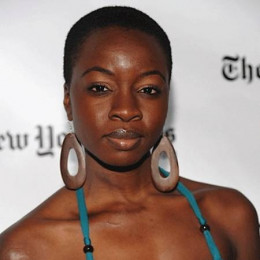 An American actress and playwright who is widely popular as Michonne among her fans which is her character name on The Walking Dead, an AMC television horror drama series. She is daughter to Josephine Gurira, who is a university librarian, and Roger Gurira, who is a chemistry professor. Her parents migrated from Africa to USA during 1960. She is the youngest among her four siblings. since her father was an academic person, he was very affirming man. When she was small she had keen interest in sports and she was good swimmer, a tennis player, a hockey player. She attended Macalester College. In starting of her career she debuted in Broadway in August Wilson's play Joe Turner's Come and Gone. In the series of Walking dead she is seen as a mistrustful, katana-wielding character who joins a group in an apocalyptic world.

Danai Gurira was born Danai Jekesai Gurira on  February 14, 1978, in  Grinnell, Iowa. She is the youngest child of Josephine Gurira, a university librarian, and Roger Gurira, a lecturer. She was raised along with her three siblings; two sisters, Shingai and Choni and brother, Tare.

Gurira used to live in Grinnell with her family but in 1983, her family moved back to Harare after the country gained independence. She fluently speaks, French, Shona, basic Xhosa, and English.

She completed her schooling at  Dominican Convent High School. Later she joined the Macalester College in Saint Paul, Minnesota and grabbed her graduate degree in Bachelor of Arts in psychology. She also gained  Master of Fine Arts in acting, from the New York University's Tisch School of the Arts.

Dania Guria started her career in the off-Broadway play where she acts and writes the script. In 2005, she succeeds to win an 'Obie Award', 'Outer Critics Circle Award', and a 'Helen Hayes Award' for Best Lead Actress for her role in In the Continuum.

Guria debutant on movies in 2007 film The Visitor and earned her first Method Fest Independent Film Festival Award for Best Supporting Actress. She has appeared in numerous movies and series including; Ghost Town, 3 Backyards, My Soul to Take, Law & Order: Criminal Intent, Life on Mars, Treme and many more.

She made her acting debut on Broadway in 2009 with Joe Turner's Come and Gone where she portrays the character of Martha Pentecost. Later she was featured in several Broadway play and wins numerous prestigious awards.

Her performance in The Walking Dead was critically acclaimed and helped her to gain popularity among an international audience. She plays the role of  Michonne, a relentless, katana-wielding woman who joins a close-knit group in an apocalyptic world.

In 2018, she will be seen in the San Diego Comic-Con, Black Panther where she portrays the role of Okoye, the head of the Dora Milaje, the personal bodyguards of the Black Panther.

Till now there has been no rumor and report regarding her affair with anyone. It seems like she is still busy in building her career rather than enjoying love life. Beside her acting career, she is also involved in activism and social charities.

Currently, she lives in Los Angeles but she spent most of the time in New York City to keep her lifestyle fit and active. She also taught playwriting and acting to children in Liberia, Zimbabwe, and South Africa.

Danai Gurira has succeeded to earned an impressive sum of net worth from her career. Her estimated net worth in 2017 is $4 million. As per some online sources, her yearly salary is more than $60,000 but official confirmation hasn't arrived yet.

Her TV series, The Walking Dead is one of the most viewed series in cable television history with highest rates. She charged a decent amount for her appearance in series. Besides this, she owns a luxurious house in LA and owns many gadgets and cars which cost millions.