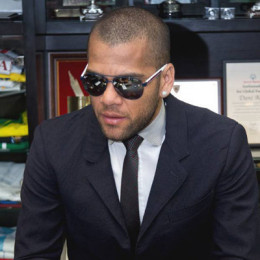 Dani Alves is a Brazilian professional football player who is currently playing for the Spanish club side FC Barcelona and also in the Brazilian national football team as a right back wearing jersey number 22. In his youth, he started as a winger but because he lacks a goal, his father repositioned him to right back.

Dani Alves is married to his second wife, Joana Sanz in 2017. They were in a romantic relationship with model Joana Sanz since 2017. The duo shares a healthy relationship and often spotted together at public events.

Previously, Alves married to Dinora Santana in 2008 in the presence of their closed ones. The couple shared two children; a daughter, Victoria Alves and a son, Daniel Alves. In 2011, the couple decided to split apart and divorced.

Dani Alves is one of the richest Brazilian footballers. He holds an impressive net worth of $60 million.

She was his long time girlfriend. They spent 6 years of marital relationship but things did not turn out well resulting in divorce. They don't have any child together.