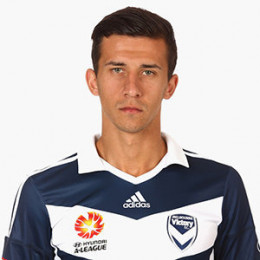 Daniel Georgievski is a Macedonian footballer who plays for the A-League team Melbourne Victory Football Club, and the Macedonian national team as a full-back. With the ability to play in any position in the defensive half of the pitch, Daniel Georgievski brings versatility and experience to Melbourne Victory's squad. The Australian-born defender has played at the highest level in Europe, including the UEFA Champions League and on the international stage for Macedonia. He had an outstanding debut season with Victory, playing in 21 of the club's 29 Hyundai A-League games as it secured a record third Premiership-Championship double.

Daniel Georgievski is single till the date. Although he was once rumored that he was in relationship with a girl named Emily but he in fact was not linked with this girl ever. This charming and talented player is single and any relationship is not disclosed to the media. We can get in touch with this player on Instagram @Daniel.georgievski