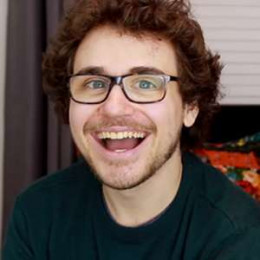 Daniel Hardcastle commonly known as Nerdcubed is a British Web Star best known for his Nerdł Plays and Machinima series 13 Ways to Die. He created a machinima series named "13 Ways to Die", series where 13 unique ways to kill the other player character in a specific video game. He calls his subscribers Procrastinators, which reached 2,000,000 in December 2014. He began a partnership for a Minecraft series "InTheLittleCubed" with Martyn of the Yogscast, in February 2013.

Daniel Hardcastle was born on 23 March 1989 in England. His birth sign is Aries.

At first, he started producing content for YouTube in the form of video blogs. He basically discussed on different current issues.

His YouTube channel OfficialNerdCubed has over 2.6 million subscribers as of December 2018.

Hardcastle has a huge net worth and salary. Details about his current assets is still under review.

Hardcastle got married to Rebecca Maughan in November 2016. The couple engaged months earlier on 4th May 2016 as per his Twitter post.

Got engaged to @Mr_Rebecca yesterday. If you want to get us a gift we're registered with the Lego Store.

The two have been living together for years and there's no rumors of the two getting divorced.