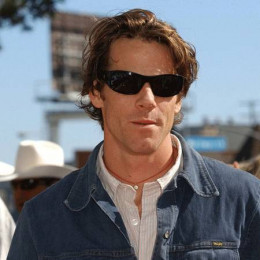 Daniel Moder is a professional cameraman who rise into fame after his works in popular movies like The Normal Heart (2014), Spider-Man 3 (2007) and Mr. & Mrs. Smith (2005). He is the son of popular producer Mike Moder. He has four siblings whose names are John, Jyl, Jane, and Debbie. He attended Saint Monica High School and graduated from the University of Colorado taking psychology as his major subject.

Talking about his personal life, he has been married twice. His first marriage wasn't successful and he divorced her and married his crush who is an actress and also a producer.

He has no children from his first marriage to Vera Steimberg. From his second marriage with actress Julia Roberts, he is the father of three children Hazel Moder, Henry Daniel Moder, and Phinnaeus Moder.

After his second marriage, there have been no reports of any kind of extramarital affair of him which proves that he is loyal to his current wife.

Talking about her 16 years of marriage, she said,

"I think that first kind of real 'seismic shift' was meeting Danny, getting married to Danny. That was the first like, my life will never be the same in the most incredible, indescribable way."

He is known for his work in movies including Fireflies in the Garden, The Mexican, and Secret in Their Eyes.

She was his first wife. After four years of their marriage the relationship didn't work out well and they filed divorce.

They first met each other on the set of the film The Mexican. After that they fall in love and later got married. Their marriage took place in Taos, New Mexico. Together they are parents of three children.

She is the only daughter beside two sons. She is the eldest twin.

He has one twin sister. He has pet name called "Finn".

He is cute and gorgeous. He is the youngest son of the family.