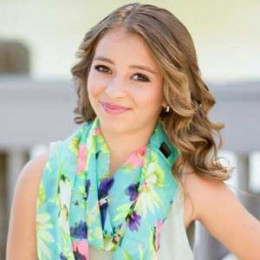 Miss Florida, Danielle Cohn is an inspiration for all the people. She earned such name and fame at an early age. Danielle is popular among millions of people through social networking sites. She is also involved in various fashion agency and earning a good figure amount. At the very early age, she is dedicated towards her career with the support of her family members. Danielle is currently in relation with Owen Bondnar.

Born on 7th March 2004 in Florida, Danielle Cohn, since childhood was interested in music and even her parents supported her for the same. She then started learning music and developed confidence in her. Jenifer Cohn, her mother, assisted her to manage all the social medias accounts. And her brother, Chad also helped Cohn in various pageant events too. She has not revealed her education background.

Danielle competed several times in Miss Florida but finished as 4th Runner-up and 2nd Runner-up. But Danielle's passion and dedication led her to win the crown of Miss Florida Jr. Preteen Queen in 2015. This success made her more confident and passionate too. She then came into limelight after posting various vlogs on the video-sharing site named, Musical.ly. Danielle gained millions of fans and became a rising star in social media sites.

Cohn's fame got her offers from several modeling agencies including Miami, US, BMG. She became the face of several products. Furthermore, Cohn opened her own store named, 'Danielle Cohn Store' where she sells accessories, mobile covers, apparel, and others. The interesting thing about the store is, every day a new product is added.

In 2017, she released her first single, 'Marilyn Monroe.'

Danielle Cohn recently revealed she is pregnant with her 10 months boyfriend, Mikey Tua on April 13, 2019. The couple announced Cohn pregnancy on their respective Instagram and Tua's youtube video. They also confirmed they are married in Las Vegas.

Despite the fact of Danielle pregnancy, it isn't still clear they are pranking their fans or serious.

Previously, there are many rumors and scandals about her relationships. Cohn was in relation with Jaydyn Price, but the news flew about their breakup after few days of being linked together.

In 2017, Cohn is dating Owen Bodnar. Owen had done many lip syncs to many pop hits in a TikTok account and was also cast in a lead role in Peter Pan Musical. They posted several photos together in social media, especially on Instagram. The young couple looks cute and admirable together.

The young star, Danielle might have an estimated net worth in 6 digits. She has a lot of views on her videos. She also earned from various modeling agencies and her own store too.

Besides, Danielle likes to entertain Children at hospitals. She even distributes teddy bear among the children. She also worked as a cheerleader in various events and is also earning from there too. Danielle shops from Forever 21.